The Bruins’ 6-1-0 record and 4.71 goals per game since returning from their two-week pause and reconfiguring their lines have made adding offensive help a slightly less pressing issue for the time being.

That doesn’t mean the Bruins are now all set at forward and don’t need to be monitoring the market, though. Adding a middle-six forward would still seem to be a priority over the next couple months, especially if general manager Don Sweeney does eventually strike a deal to ship out Jake DeBrusk. While DeBrusk’s presence may not make or break the Bruins’ season, his departure would at the very least cut into the Bruins’ depth if they’re unable to get an NHL forward in return.

There are at least a few forwards we know are either already available or are expected to be available. Let’s take a look at four of them and see if they make sense for the Bruins.

Kane is currently an unrestricted free agent after clearing waivers and having his contract terminated by the San Jose Sharks. He is reportedly only looking to sign a one-year deal through the end of this season. His 49 points in 56 games last season gave him his highest points per game rate of his 12-year career. He’s the kind of power forward the Bruins could certainly use.

With Kane, however, on-ice production is far from the only consideration. If it were, the Sharks wouldn’t have just released him.

Kane was accused of assault and harassment back in 2016 when he was a Sabre. In 2019, he was sued by a casino for not paying off a gambling debt. Last summer, his estranged wife accused him of domestic violence and of betting on his own games. The NHL investigated both accusations but was unable to substantiate them.

In the fall, the NHL suspended Kane 21 games for using a fake COVID-19 vaccine card. The last straw for the Sharks was an alleged violation of COVID protocols while he was playing for their AHL team. The NHL is reportedly investigating him for crossing the border into Canada before he had completed a required COVID quarantine. Many of his teammates reportedly didn’t want him back with the team anyways.

Some have cited the Bruins’ strong leadership and highly regarded locker room culture as a reason Boston might be a place Kane could get back on track and avoid further problems. On the contrary, I’d argue it’s more of a reason to just stay away.

The reason the Bruins have such a good culture is that they place a high value on character. Unlike the Patriots, who have taken chances on “bad apples” from time to time, the Bruins have generally just avoided those kinds of players all together. While Kane’s talent is tempting, all the off-ice issues are impossible to ignore, and the Bruins would be wise to not compromise their values for him.

When Sweeney was asked about Kane on Tuesday, all he said is that the Bruins, like every other team, would do their “due diligence” on any player who’s available. Coach Bruce Cassidy said on Wednesday that he had not talked to Sweeney about Kane. It sounds like the Oilers may be making the most aggressive push to sign Kane anyways.

“As Boston welcomes back Tuukka Rask, wonder if Max Domi makes any sense for the Bruins,” he wrote.

That’s it. Just the one sentence. But Friedman doesn’t drop little nuggets like that unless he’s actually heard something. So, Max Domi…

Now 26, Domi’s excellent 72-point season with the Canadiens in 2018-19 is increasingly looking like an outlier. However, he can still be a productive middle-six forward on a playoff team.

Formerly a center and now more of a full-time left wing, Domi doesn’t bring a ton to the table in terms of an all-around game. But if you’re looking to add some offensive pop and skill to the third line -- likely upgrading from DeBrusk in the process -- then Domi can help.

Domi is an unrestricted free agent after the season and carries a cap hit of $5.3 million this year. It seems more likely than not that the Blue Jackets trade him before the deadline, so he’ll be available. The question is what it will cost to get him. The Bruins would presumably pounce on a 1-for-1 involving DeBrusk, but it may take more than that.

And here’s a player Friedman’s podcast partner, Jeff Marek, mentioned. While discussing the numerous players the Arizona Coyotes could be open to trading (we took a look at defenseman Jakob Chychrun here), Marek reported that the Bruins “have always been attached” to Crouse.

Crouse was drafted three picks ahead of DeBrusk in 2015 and hasn’t lived up to expectations, settling in more as a decent third-liner in recent years than a top-six scorer. This has naturally led some to raise the possibility of a 1-for-1 DeBrusk-for-Crouse swap. At 6-foot-4, 220 pounds, Crouse would also bring some desired size and physicality to the Bruins’ forward group.

Crouse is having the best offensive season of his career this year, with 17 points (9 goals, 8 assists) in 33 games. That’s a bit of a double-edged sword from a Bruins trade perspective. On the one hand, it makes him a more appealing option and gives you more confidence he could help you offensively if you got him.

On the other, it means DeBrusk (with 10 points in 28 games) alone may not be enough to get a deal done. If the additional compensation isn’t too much, Crouse remains a worthy target. If the price goes much higher than that, though, the Bruins should continue to shop around.

So, here was Marek’s full quote when he mentioned Crouse: “Also interest in Phil Kessel and Lawson Crouse [around the league]. Boston has always been attached to that name.”

He is clearly saying that the Bruins have been attached to Crouse, not Kessel. Let’s not get this twisted. But with Kessel being mentioned in that same sentence, it’s hard to stop the wheels from turning a bit.

Everyone expects Kessel to be traded before the March deadline. He’s 34 years old and he’s an unrestricted free agent after the season. There’s no reason for the rebuilding Coyotes to hang onto him. He has a $6.8 million cap hit, but Arizona could be willing to eat some of that.

While Kessel is no longer the star scorer he was in his prime, he’s still a productive player. He had 43 points in 56 games last year and has 23 points in 34 games so far this season. Plenty of contenders could find a place for him in their top nine. His postseason resumé, which includes 45 points in 49 games during the Penguins’ back-to-back Cup runs in 2016 and 2017, has not been forgotten.

Could the Bruins take a look at the player who once looked like a potential franchise cornerstone? Perhaps more importantly, would Kessel even consider a return to the Bruins? He has the right to submit an eight-team trade list to the Coyotes, so if he doesn’t want to go to Boston, forget it.

Things didn’t end well between the Bruins and Kessel back in 2009. He was 21 years old and coming off a breakout 36-goal season (as well as a point-per-game postseason), but he and the team were too far apart when it came time for contract negotiations that summer. There were also reports of friction between Kessel and coach Claude Julien.

You know the story from there: The Bruins ended up trading Kessel to Toronto for two first-round picks and a second-round pick. The two first-round picks both ended up being top-10 picks, which the Bruins used on Tyler Seguin and Dougie Hamilton. It looked like a steal for the Bruins, leading to years of “Thank you, Kessel” chants when he played at the Garden. Of course, it looks like less of a steal in retrospect given how little the Bruins got in return when they eventually traded both Seguin and Hamilton, too.

All of that was a long time ago. The Bruins have a different coach and general manager now. Maybe any hard feelings would be long gone.

Do we think it’ll happen? No. Does it make enough sense to at least consider, though? Sure. And is it fun to think about? Definitely. 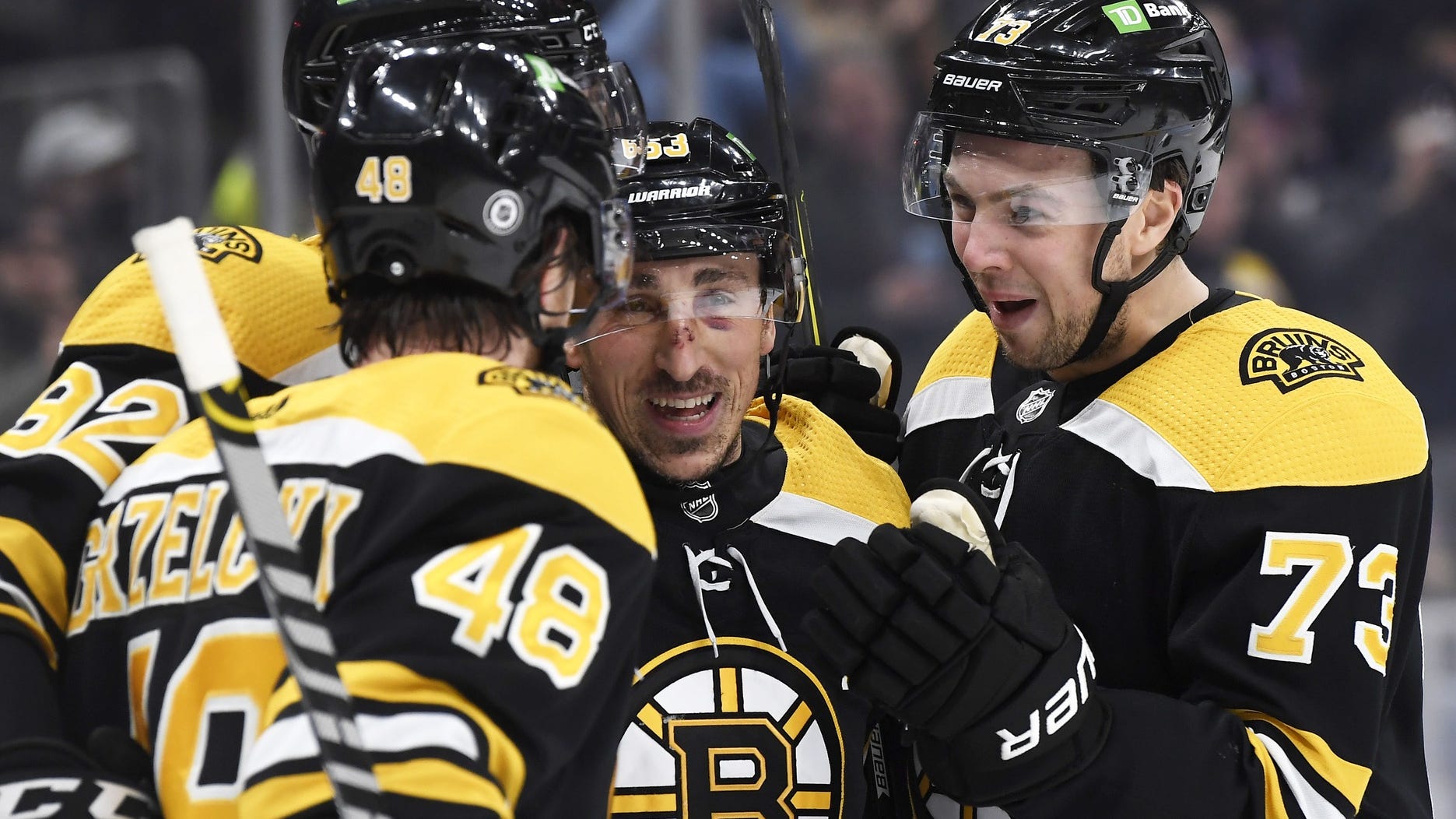