How fearful should the Celtics' be of Kyrie Irving, Kevin Durant and the Nets? Not enough to prevent exploring a trade that should make sense for both teams.

Allen has shown flashes of being a damn good big man in this league. He has a 7-foot-6 wingspan and has shown he can guard the perimeter better than most big guys in the NBA.

Allen is the rim protector the Celtics have missed over the last couple seasons. So why do the Nets want to part with him? Well, the Nets are now led by head coaches Durant and Irving. That means the guys KD and Kyrie like will probably be playing more in 2021. And what was interim head coach Jacque Vaughn’s first move after Kenny Atkinson was fired? Move DeAndre Jordan into the starting lineup with Allen headed to the bench. Jordan coming off the bench was a real issue with the Nets, namely Durant and Irving as the three players are close. ​ESPN’s Zach Lowe ​said that Jordan coming off the bench was a real issue inside the Nets locker room​.

As for parting with Langford, no one in Boston may be higher on him than Brad Stevens. Believe it or not, the first guy off the bench in Game 2 of the Eastern Conference Finals was Langford. Stevens trusts him on defense but the lack of a jumpsuit is concerning. Langford had two seasons since being a McDonald’s All American and one of the state of Indiana’s all time leading scorers -- both have seen wrist or thumb in his shooting hand affecting his play.

The Celtics could regret giving up Langford and the Timelord, but this is a win now move. 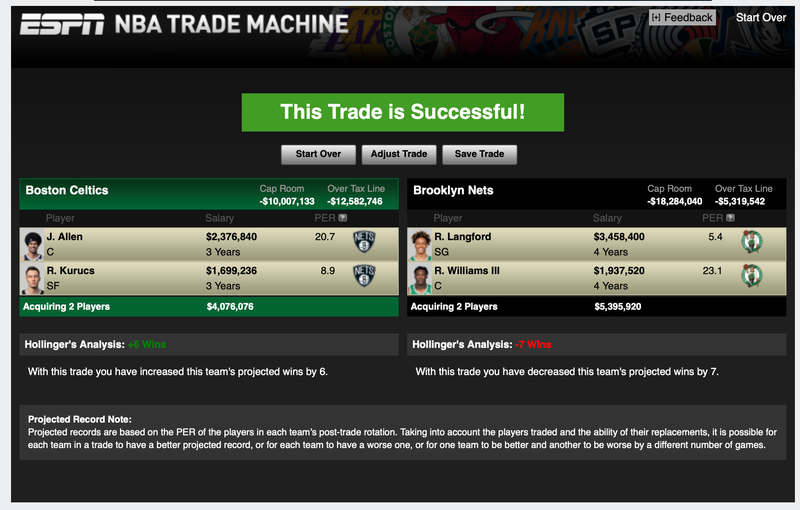