The Boston Red Sox have a few big decisions to make in the near future. The stalwarts on the left side of the infield, Xander Bogaerts and Rafael Devers, are set to hit free agency in the next two years.

The Red Sox already saw what losing a superstar can do when they traded Mookie Betts to the Dodgers in 2020. That’s played a factor in the last two years and will continue to have an impact in the coming offseasons.

ESPN MLB insider Buster Olney told WEEI’s Rob Bradford of Audacy’s “The Bradfo Sho” podcast what he thinks will happen with Bogaerts and Devers in Boston.

“I think that they’re gonna make Devers an offer he can’t refuse. I think that the stakes are growing by the day in terms of the importance of re-signing Devers to reverse — to put that narrative into a box — they need to sign Raffy Devers,” Olney said. (13:25 in player above).

That narrative, of course, stems from the Betts trade two years ago. The Red Sox returned to the playoffs last season, but that only came after a last-place finish in the shortened 2020 season.

“I think that with Bogaerts, he’s far enough out the door. He’s got one foot out the door in a sense because he can opt out, his agent’s Scott Boras,” Olney continued. “There are going to be other teams I know that are going to be interested in him, he can get a better deal. The one-year extension offer in the spring — not good — in terms of stoking that relationship.

“I think the pressure will be on the Red Sox to pay Devers, and as we’re sitting here today, I think they will.”

It's a reminder of how quickly things can change in the baseball world. Just less than one month ago, Olney said there was no indication that the Red Sox will do what it takes to keep Devers.

The Red Sox will have to pay a “tax” for their past decisions, however, Olney said.

Locking up Devers to such a contract doesn’t necessarily fit with Chief Baseball Officer Chaim Bloom’s mindset, which is why all eyes should be on John Henry and Tom Werner.

“I think that Chaim will never waver. I think that he will evaluate players purely based on what he thinks the market value is. And that’s why I think it’s so important to pay attention to ownership and whether or not they veer,” Olney said. “If they re-sign Devers, that’s totally up to John Henry, Tom Werner, etc.” 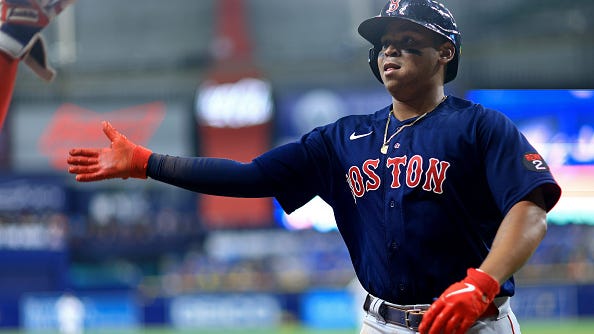 5 MLB stars that could be trade candidates this winter