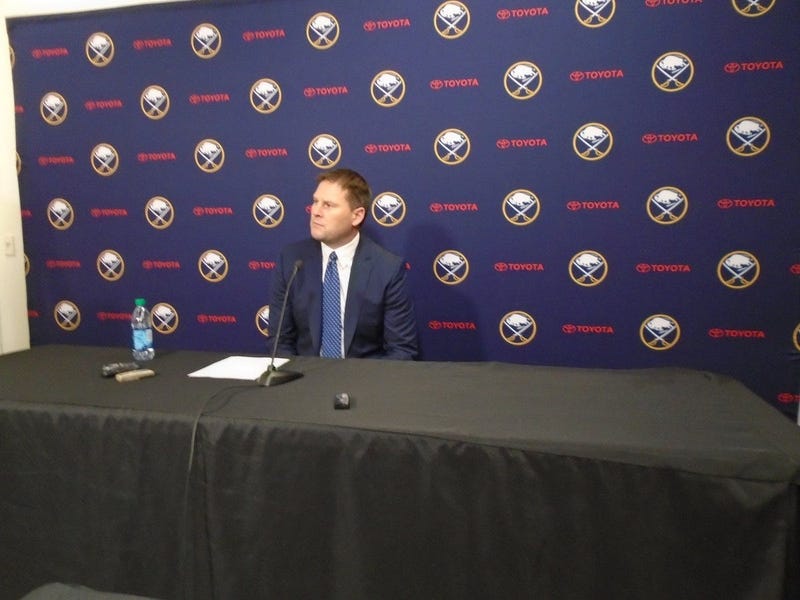 Buffalo, NY (WGR 550) - Jason Botterill spoke to the media and Buffalo hockey fans on Sunday. Botterill said in February that there wouldn’t be a coaching change and then the Pegulas both spoke in March about Jason making it clear that there wasn’t going to be a change.

Botterill is very much his own man. He didn’t ask Phil Housley his opinion on trades and he didn’t ask the owners for their opinions on firing Housley. Botterill called the Pegulas Sunday morning and they supported his decision to change coaches. I think the biggest question is, why now? This ship had been sinking since December and Botterill said it eventually became evident to him, “The results in the second half just weren’t there. We were very inconsistent. Our fans expect more, we expect more.”

This team was horrendous and the pressure is on Botterill to make it better. He cannot swing and miss on the roster again and expect to keep his job next spring. The GM acknowledge that, “We all need to be accountable and not make excuses.

“We didn’t put the proper roster out there. We didn’t give Phil enough tools to have success out there.”

Many think Kim and Terry Pegula are meddling owners. They, of course, want to know what’s going on and are in constant communication, but firing Housley was not their decision. They feel they’ve hired Botterill to run this team on the ice. Botterill said, “They were not involved in firing Phil. I had discussions with them about where I was at, I made my recommendation this morning to them, they accepted it and then I had the conversation with Phil.”

You don’t have to be a rocket scientist to know that it was all Jack Eichel, Jeff Skinner and Sam Reinhart. After that, the Sabres got very little contributions and Botterill knows it, “We relied on them too much. We have to continue to develop the young players in our organization and we have to continue to look and find depth scoring.”

If he wants to find depth in scoring, it would help if he doesn’t lose 40 goals out of his current lineup. There are many fans that think Skinner has no desire to play for a dysfunctional team and unstable organization. Botterill said there is still a real possibility that Skinner will be re-signed, “Yes, 100% and both sides have continued to focus on how do we get a deal done? I can understand where fans are coming from and I think the relationship from both sides has been a positive one so that’s why we’re trying to find a resolution.”

The next coach of the Sabres needs to be a man that understands the abilities of his players. Having a system is great, but if your players can’t execute that system, what’s the point? He has to be able to adapt to what the players can do.

The next coach also must be able to make young players better. I think too many young players regressed this season and that’s just not something this organization can afford.

With the exception of Tage Thompson, Botterill and Randy Sexton have done an excellent job in developing players. They understand you can’t rush young players and they make sure Chris Taylor has them ready before they come to the NHL.

The buck ultimately falls on Botterill. He can’t make a mistake hiring this coach. He can’t make another mistake in building this roster. I like the trades to bring in Skinner and Brandon Montour. He gave up next to nothing to see if Conor Sheary can fit in. The Ryan O’Reilly trade is one that we won’t know for at least three years if it’s a good one or not. The problem is there’s a lot of dead weight on this team. There are players that have known nothing but losing in this organization. Some of them are just to the point where they don’t even want to be Buffalo Sabres any more. That is what the general manager is up against and he has one more year to fix it.