The Buffalo Bills have had to sit on their last-second, Hail Mary loss to the Arizona Cardinals for a couple of weeks. They’ll get back on the field on Sunday, and look to get back into the win column at home against the Los Angeles Chargers.

The Bills' motto this season has been "Find A Way." They'll have to do that on offense without John Brown now.

The team announced on Saturday that it has placed the veteran wide receiver on Injured Reserve, meaning he’s out for this contest, and at least two more.

It’s clear that when Brown’s not on the field, or noticeably not healthy, the offense is not nearly as efficient. Check out some of these numbers for quarterback Josh Allen with and without Brown in the lineup from ESPN fantasy football guru Matthew Berry:

So here’s two pictures. First picture is John Brown’s game log. 2nd picture is Josh Allen’s game log. Yes Allen was awesome vs LA when Brown wasn’t there but the other games? You’re still starting Allen this week but Brown being out is a bigger deal than you think. https://t.co/SGAENFUHPT pic.twitter.com/RiMFoVKCpP

The Bills need to have more answers with Brown out of the lineup. We’ll see if they came up with them during the bye week, knowing he wouldn’t be available.

This game will feature the top-two wide receivers in the NFL in both targets and receptions.

Chargers wideout Keenan Allen is No. 1 in both categories, followed by Bills receiver Stefon Diggs, No. 2 in each.

Allen has been pretty incredible all season, highlighted with a 16-catch, 145-yard performance last week against the New York Jets. He’s had at least nine catches in four of his last five games. He’s the No. 1 weapon in their offense, and the Bills will have to keep him from putting up big numbers.

He’s not the fastest and won’t be running by defensive backs, but he’s very smart and runs excellent routes. The Bills typically do a good job of not allowing big plays, anyway, but Allen can keep drives alive with third down catches and find seems and holes to get open. They’ll have to be well aware of where he is at all times.

They’ll have to be well aware of where he is at all times.

Chargers rookie quarterback Justin Herbert has looked anything but since he became the starter back in Week 2 after Tyrod Taylor suffered a punctured lung due to an injection.

Herbert has thrown for 2,699 yards and 22 touchdown, both top-10 in the NFL this season. He’s completed 68% of his passes and only thrown six interceptions. Those are terrific numbers for a rookie quarterback.

No matter the situation or defense, Herbert has found answers. Now it’s up to Bills head coach Sean McDermott and defensive coordinator Leslie Frazier to find the formula to confuse him and force him into mistakes, or at least minimize his efficiency. 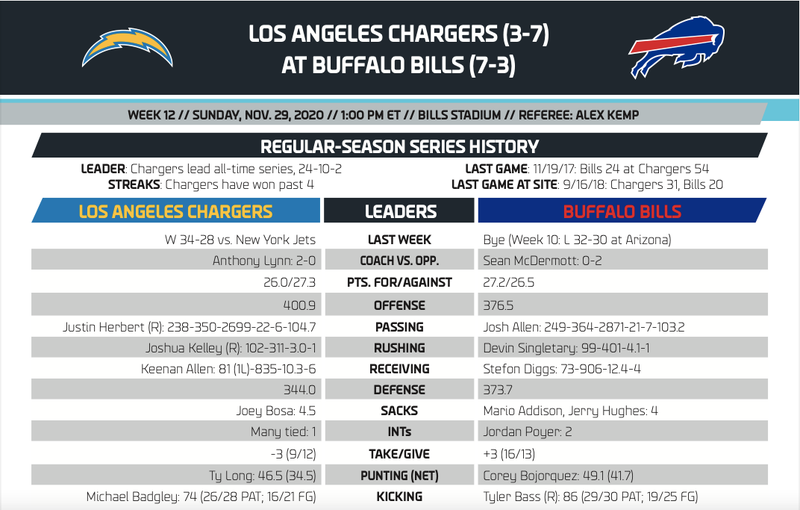 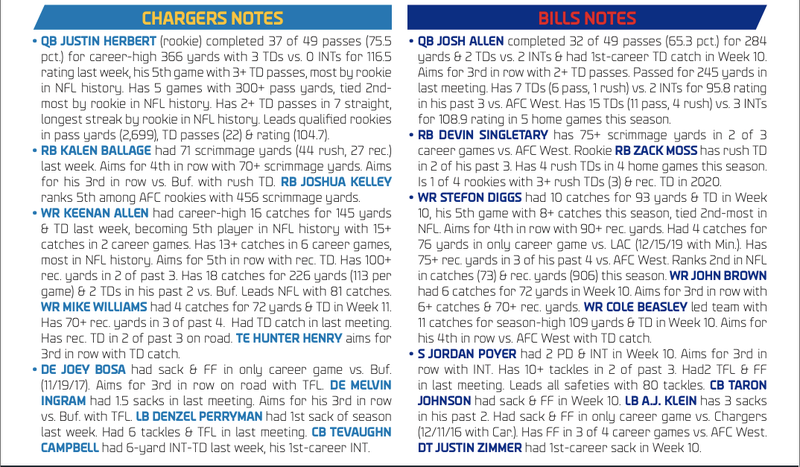