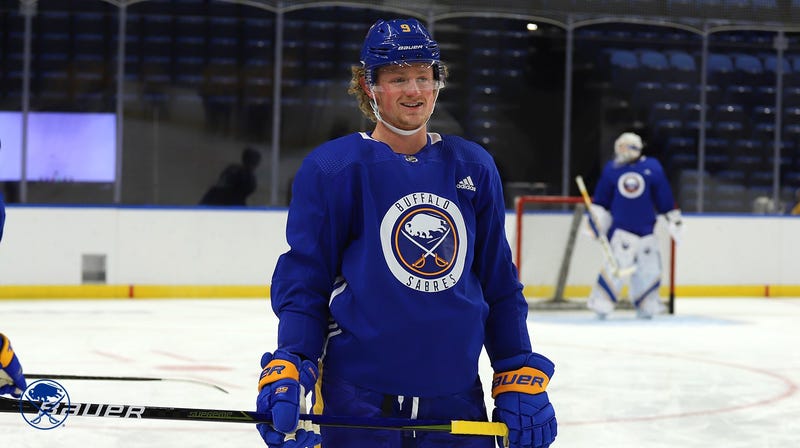 Jack Eichel was on the ice for his first practice of training camp on Wednesday after missing the first three practices and the intrasquad scrimmage on Monday with an upper-body injury.

The Buffalo Sabres announced prior to the first practice of camp this past Friday that Eichel had sustained his upper-body injury while training. The Sabres captain confirmed on Wednesday that his injury happened some time before camp opened while getting ready for the upcoming season.

"I hurt myself a few weeks ago on the ice just training, so today was a good test for me to get out there and be out there on the ice with more bodies than I'm used to," Eichel said following practice. "It's been a while since I've been on the ice with that many guys, so I feel like I was a couple steps behind today. Hopefully that starts to come back and start feeling like myself again."

Not only was this the first practice for Eichel of training camp this season, but this was the first practice he took part in with his teammates since March 11, 2020. The next day saw the NHL season suspended as the COVID-19 pandemic forced its hand on the sports world.

As Eichel took the ice with the rest of his team on Wednesday, he tried to remind himself that his first practice may not be as clean and crisp as he would like it to be on a regular basis.

"It's been a while since you've played a game, so I tried not to have too many expectations today of how I was going to feel on the ice," Eichel said. "As any competitor, I think you're frustrated when you don't feel or perform as good as you want, but that's the reality of it. You haven't played a game, you haven't been on the ice with that many guys in 10 months or whatever it's been.

"I think guys have to be realistic here and understand that it's not going to be as clean as I think everyone probably expects, but that's just how it's going to go. Every team is in this same situation. I think it's important to get our systems down, get used to being on the ice with each other, make sure we're working harder there and be ready to compete more than anything."

One person who was happy to have his captain back on the ice Wednesday was head coach Ralph Krueger. He, too, had a message for Eichel before practice to not get expectations too high on himself, and that he's confident that he can get back on track in no time.

"Jack is clearly our leader on the ice. To have him back, his presence back is excellent," Krueger said. "I did speak with him the importance of being patient now because he did miss those first four days of extremely intense practices and work. For him, the first time in a big crowd like that, on the ice in a long time - we were kind of smiling about it at the halfway mark. We know the genius of Jack. He'll find his way back quickly."

Eichel took to the ice on Wednesday lined up under center with Victor Olofsson on his right side, and newcomer Taylor Hall off to his left wing. Olofsson also returned to practice on Wednesday after suffering an upper-body injury on the second day of practice on Saturday.

It was the first time we got a chance to see Buffalo's top line in action with all three players working together in line rushes and drills. For Eichel, getting the chance to skate with his linemates, especially Buffalo's top acquisition of the offseason in Hall, was something he has been looking forward to.

"You just try to build a relationship with him, get to know his tendencies. Obviously it's the first time we've been on the ice together, so we're just trying to build some chemistry as much as possible [knowing] we're going to play in a week," Eichel said. "Just trying to communicate as much as we can, and it's good to be out there, good to be working in a line and getting back to somewhat normal hockey."

The Sabres also got goalie Linus Ullmark back on Wednesday for his first practice of training camp after he was forced to quarantine due to immigration issues after coming back from Sweden.

However, Buffalo did not get good news on Wednesday regarding forward Zemgus Girgensons, who underwent surgery to repair a hamstring injury suffered during Monday's scrimmage. The expected timetable for Girgensons' recovery is approximately six months, which would put him out of the lineup until early July. The only way Girgensons would be able to dress for the Sabres this season is if Buffalo goes on a deep run in the 2021 Stanley Cup Playoffs.

"You just feel terrible for him," Eichel said of his teammate of five seasons. "He's had a long offseason, as we all have, and he's a super important part of our team. It's a big loss in our lineup, big loss personality-wise, he brings a lot to our group on and off the ice. We're going to miss him deeply. I know he'll have a good recovery and he'll be back before you know it, but it's unfortunate that you lose him for as long as you do. You just feel for a guy like that who's put so much work in, and then it seems like it's taken away from him right before the season."

"We all can feel the hole that Zemgus leaves with his injury. The character, the work ethic," Krueger echoed. "The role that he has in our group is something that makes him unique, and everybody [in the group] needs to [chip in] a piece to that hole. We're going to keep Zemgus close because of how important he is in the organization, what a personality he is in the organization. We want to keep him close in the rehab and help him to get back, but it's part of sports, and we need to move forward and look at our options."

The Sabres also announced on Wednesday that prospects Dylan Cozens and Jack Quinn have been added to the training camp roster, and that both players are expected to join the rest of the group for training camp in the coming days.

Both players join the Sabres for training camp after settling for the silver medal with Team Canada on Tuesday night at the 2021 IIHF World Junior Championship. Cozens and Quinn finished second in the tournament behind fellow Sabres prospect Ryan Johnson, who captured the gold medal for the United States on Tuesday with a 2-0 win in the final.

As a player who has represented the United States in a number of international events, twice at the World Juniors, Eichel admitted that he was excited to see the U.S. win the gold medal on Tuesday in Edmonton. However, he's looking forward to integrating both players into the group going forward, especially Cozens, who will likely be battling for a full-time roster spot in the 2020-21 season.

"He had a really good tournament, so he's probably going to have a bit of an advantage on a lot of us having played however many games they just played," Eichel said of Cozens. "It's good that he got that experience, and it's nice to see him having such a great showing. Hopefully he can come in here and make an impact, as well."

Here is how the lines looked at Wednesday's session:

The Sabres will return to the ice again on Thursday morning at 10 a.m. EST at KeyBank Center.