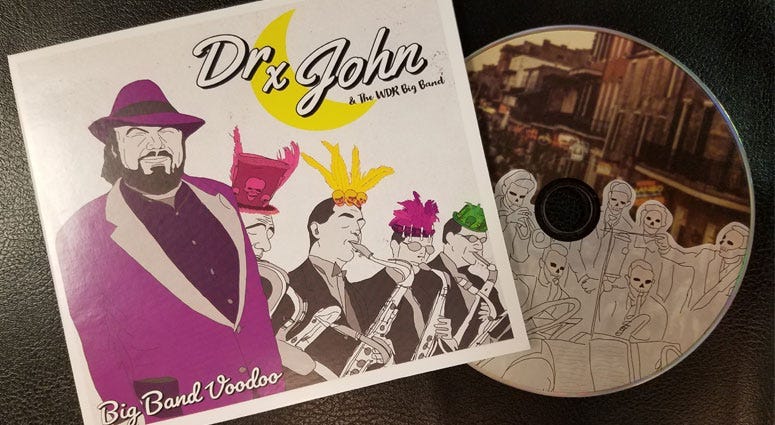 We’ve been blessed with a new album, a lost treasure from the legendary Dr. John. The album is called “Big Band Voodoo” and it features Mac playing with the WDR Big Band and was recorded in 1995. It’s been stuffed away ever since, but after all these years, it’s been recovered  - it’s out today and available everywhere music is sold, including streaming services like Amazon and Spotify.

“This album shows the total capability of Mac’s talent,” Chaisson said. “It’s just incredible, the merger between the big band, his syncopated piano playing, his vocals and phrasing… he is absolutely phenomenal in this release.”

Newell raved about his experience hearing an advance copy. “I heard the entire thing yesterday!” he said. “I’ve been just driving around listening to this.. his voice is so strong in this album!”

“It’s very strong… he never complained about any throat problems, anything like that. At this time when the record was done he was at the pinnacle of his recovery and he realized his place in the world, why he was born. He really put it out there, he’s at his top here.”

The album was recorded in Cologne, Germany. How did that come about?

“We were discussing this type of project in his brownstone in New York and the agent called and asked if we’d be willing to do a European tour and of course, we said sure. We booked the tour and from our conversations talking about big band, I started doing a little research and heard about the WDR Big Band and was able to contact them and get this done.”

“The WDR Big Band is renowned throughout Europe… there are not a lot of solo musicians that get the chance to work with them, isn’t that right?” Newell asked.

“Absolutely. You have to be in a certain category of artist to be accepted by them… they were started after World War II to help the German people come back from all that destruction. WDR is like the BBC is in the UK, it is the radio of Germany.”

“So this sits around, you cut it but it doesn’t get released. What happened?”

“Mac worked constantly,” Chaisson said, “and was always traveling, always fielding requests and was always doing work ‘after the work.’ We decided because of contractual obligations to different record labels, with advances for him to record with them… I just didn’t want to interfere with any of that, because those were very good projects as well. So I put this away, it was on a DAT (Digital Audio Tape) and I moved a couple of times and it was in boxes and I just kind of forgot about it. I bounced around, changed careers… later I started talking to Mac about it and it came up and I didn’t want to deal with any machine to listen to it again because I was afraid if it was a bad machine, it would eat the tape up. It was such a phenomenal performance though… it needs to be heard.”

“This is the only album ever released by Dr John in the big band style, right? What was his reaction to it”

“In a Sentimental Mood, which he won a Grammy for, was in the jazz category, but this is more true to the genre. Mac was always studious when he was playing… we had one rehearsal with the band before we recorded it and he was really overwhelmed, he was extremely happy with what he heard.  John Clayton did a marvelous job with the arrangements, and these guys in WDR just pick up and merge so well, it was a really natural thing.”