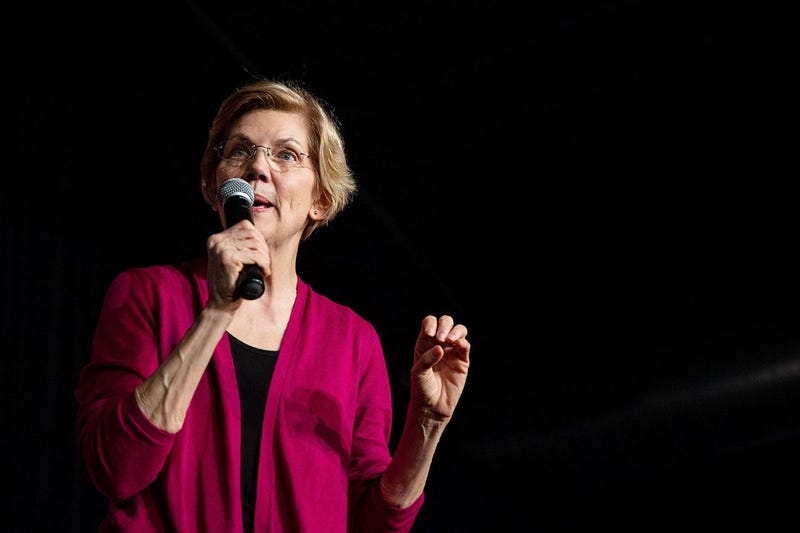 LISTEN NOW as Elizabeth Warren speaks as she ends her 2020 Democratic presidential bid.

Elizabeth Warren has ended her 2020 Democratic presidential bid on Thursday and will be making an announcement later in the day, according to reports.

The New York Times was the first outlet to report that she's dropping out.

The senator ends her campaign after a disappointing results during Super Tuesday, including the loss of her home state of Massachusetts and native Oklahoma.

It is still unclear if Warren will endorse either former Vice President Joe Biden or Senator Bernie Sanders.

Warren’s campaign began with enormous promise that she could carry that momentum into the presidential race and drew tens of thousands of supporters to Manhattan’s Washington Square Park last year, a scene that was repeated in places like Washington state and Minnesota.

She had a compelling message, calling for "structural change" to the American political system to reorder the nation’s economy in the name of fairness. She had a signature populist proposal for a 2% wealth tax she wanted to impose on households worth more than $50 million that prompted chants of “Two cents! Two cents!” at rallies across the country.

Warren, 70, began her White House bid polling near the back of an impossibly crowded field, used wonky policy prowess to rocket to front-runner status by the fall, then saw her support evaporate almost as quickly.

Her candidacy appeared seriously damaged almost before it started after she released a DNA test in response to goading by Trump to prove she had Native American ancestry. Instead of quieting critics who had questioned her claims, however, the test offended many tribal leaders who rejected undergoing the genetic test as culturally insensitive, and it didn’t stop Trump and other Republicans from gleefully deriding her as "Pocahontas."

Warren appeared to further hit her stride as she hammered the idea that more moderate Democratic candidates, including Biden, weren’t ambitious enough to roll back Trump’s policies and were too reliant on political consultants and fickle polling. And she drew strength in the #MeToo era, especially after a wave of female candidates helped Democrats take control of the U.S. House in 2018.

But Warren couldn’t consolidate the support of the Democratic Party’s most liberal wing against the race’s other top progressive, Sanders. Both supported universal, government-sponsored health care under a “Medicare for All” program, tuition-free public college and aggressive climate change fighting measures as part of the “Green New Deal” while forgoing big fundraisers in favor of small donations fueled by the internet.

"I’m not somebody who has been looking at myself in the mirror since I was 12 years old saying, 'You should run for president,'" Warren said aboard her campaign bus on the eve of the New Hampshire primary, previewing a ceasing of campaigning that wasn’t yet official. "I started running for office later than anyone who is in this, so it was never about the office — it was about what we could do to repair our economy, what we could do to mend a democracy that’s being pulled apart. That’s what I want to see happen, and I just want to see it happen."

She vowed to fight on saying, "I cannot say, for all those little girls, this got hard and I quit. My job is to persist."

But even that seemed impossible after a Super Tuesday drubbing that included her home state.

The Associated Press contirbuted to this report.