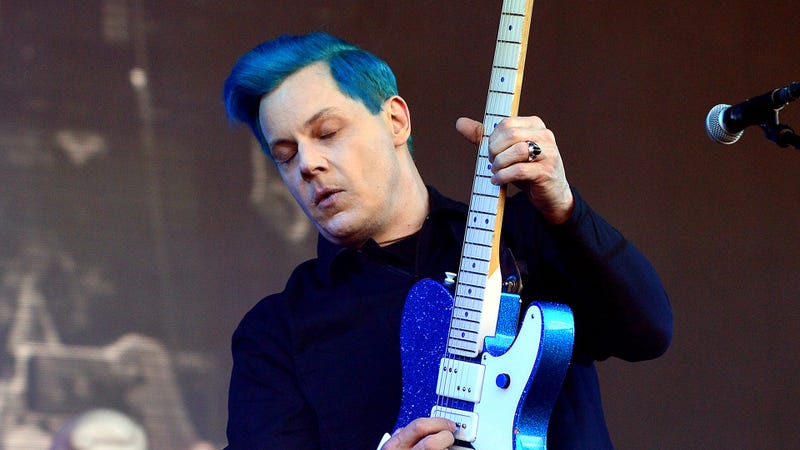 On today’s episode of the Broken Record podcast, friend of the show Jack White drops by the legendary Shangri-La studios in L.A. after a two-night stand on his Supply Chain Issues tour to talk to producer and podcast host Rick Rubin, diving into some of the fascinating ideas, asides, and musical history that let you know just how deep the solo artist and former frontman for The White Stripes truly is.

Through business dealings with his label, Third Man Records, along with three accompanying retail stores, one of the few fully operational vinyl pressing plants in the U.S., and just this year releasing two full-length solo albums with a world tour to support -- it's more than apparent the Detroit native is one of the hardest working artists around.

During their chat, the duo got into the early Garage Rock scene that blossomed in White's hometown which helped to shape his unique sound and eventually that of his breakout project, The White Stripes. "I was learning slowly about it," Jack admits. "There was a band, the most important band from then was called The Gories, they were a three-piece [with] a female drummer named Peg who only had two toms, no skin on the kick drum -- she put her foot in the kick drum to hold it steady... and a tambourine taped to the kick drum. That was the drums; two guitar players, no bass, very cool. Black male singer, white female drummer, white male guitar player -- no bass, no kick drum, and such a unique sound. They were the kings of the Detroit Garage Rock scene and still are. They just had stopped performing when I was old enough to go to shows, I just missed them. They split into these other groups called The Dirtbombs and Rocket 455, and I saw those bands and ended up playing with those bands a couple years later."

This, mind you, was back when the future rockstar was just a teenager apprenticing in an upholstery shop, getting into music alongside his co-worker, who like Jack, also played the drums. He decided to start to learn how to play the guitar, mainly he says, because it would enable him and his friend to jam out. "We would move the furniture aside and bring out the drum set at the end of the day sometimes," he says. "It was a pretty amazing experience to be an apprentice and also get to play music... and getting into this kind of music too."

Before finding success with The White Stripes, Jack tells Rick that he was perfectly happy with the two-person sound he and Meg had created. "It definitely felt special, and it felt right, and felt good," he explains. "If someone came into the room and said, 'we were going to try to take this to the mainstream,'" he contends, "I would have said 'that's not going to work.' I'm not going to pretend that I know everything about music or the music business, but my vote would be -- I wouldn't bet on that. It still shocks me that that connected with people."

One of the more recognizable songs available in the band's catalog undoubtedly would be their 2004 GRAMMY award-winning hit "Seven Nation Army." Sharing some potential theories about why the riff -- heard in soccer stadiums worldwide -- is so damn catchy, Jack admits he's done some research into the science behind how the brain resolves melodies. Among numerous theories he's heard regarding the song, one article caught his attention, which spoke about the way our brains find a thrill when it can guess or complete a melody pattern. "Maybe that 'Seven Nation Army' with the melody -- there seem to be two moments in there, if I were to analyze it," he says, that get you to question its direction. "Your brain can say, 'I can deal with it.' I don't know, it's just a guess."

Also during the podcast, Jack treats Rick to a surprise guest appearance from Neil Young, for an acoustic performance of his Entering Heaven Alive track “A Tip From You To Me.”

Listen to the full Broken Record episode featuring Jack White -- now playing on Audacy -- and follow along for more conversations with hosts Rick Rubin, Malcolm Gladwell, Bruce Headlam, and Justin Richmond as they speak with the musicians you love to discuss their lives, inspiration, and craft.

Follow even more of your favorite music on Audacy's all-new The White Stripes Radio, Alterna 00s,'90s and Chill, ALT Roots, Arena Rock, Wake Up and Rock, and The Roots of Rock stations -- plus check out our talent-hosted Kevan Kenney's Music Discovery, Megan Holiday's My So Called '90s Playlist and Scott Lowe on the Go's Post Modern Music Box!