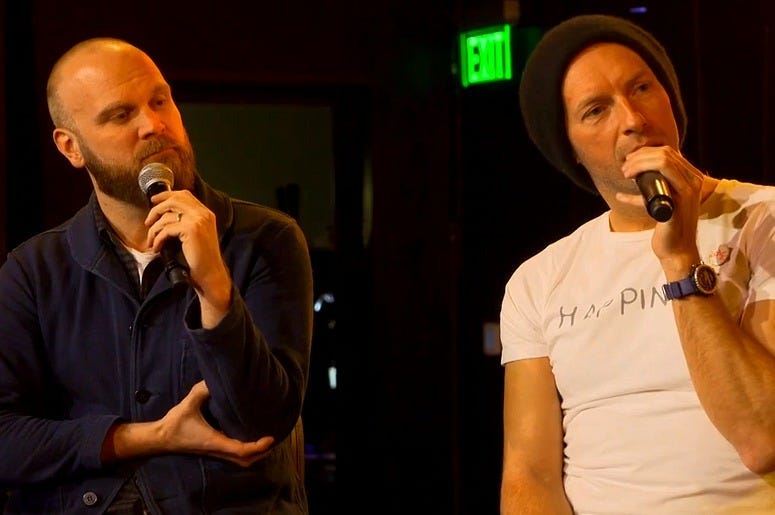 Coldplay opened up our new HD Radio Sound Space in Los Angeles on Friday night with an intimate performance for our first ever RADIO.COM LIVE event. It marks the second time the band has helped us mark a Sound Space grand opening, previously playing the original space in 2011.

“Any time you open a new space, we’ll open it for you,” smiled Chris Martin before the band took the stage, talking with KROQ’s Stryker and Klein. “We refuse to play in a building anyone else has ever played in,” he jokes. “We only play new buildings.”

Everyone has grown a lot since that performance, and it’s an honor to welcome the band back on the heels of their new album, Everyday Life. There’s no big stadium tour or halftime show this time around, so this intimate performance is even more special from the band. It's also more nerve-wracking according to drummer Will Champion.

“In the live show, when we’re playing one of our concerts, if you make a mistake you get a lot of chances to make up for it,” Champion explained. “Whereas, on radio and television, those things are indelibly etched on people’s memories cause they’ll be watching it over and over again. So I do get more nervous on radio and TV than I do on our live shows, for sure.”

Coldplay has a long history with KROQ in Los Angeles, playing one of their first shows ever for the station nearly 20 years ago. “We got told, ‘listen this radio station that’s really important has been playing your song so it’s time to go to America.’ It’s been a miracle since then,” Martin remembered. “We were just so lucky to get over here,” added Champion, noting how notoriously difficult it was for British bands to “break” in the US.

There’s been a lot of groups that have come and gone since then, and Martin shares that it is being equals in the band that has helped them to last so long. Now Coldplay has evolved into something uniquely special, with the next generation even taking part in the project. Martin’s children contributed to Everyday Life, featured on the lead single “Orphans”

“Well we’ve always kind of forced our children to work,” he joked. “We really appreciate the Victorian times of young British children getting an honest day’s pay.”

“Whenever we’re on tour, any of the kids that are around, we’ll drag them on stage for something or other. It just so happened that when I was doing the demo of that song ‘Orphans’ I just asked my children and a couple of their friends, and then ultimately loads more people if they would sing the chorus. They’re so sweet about it, and of course we do pay them properly,” he smiled. “Of course I’m bias, but I really like listening to them. So to be me they made the song sound great.”

For much more from Coldplay including their process of recording Everyday Life, check out the full interview above. Be sure to watch their performance on RADIO.COM LIVE here.