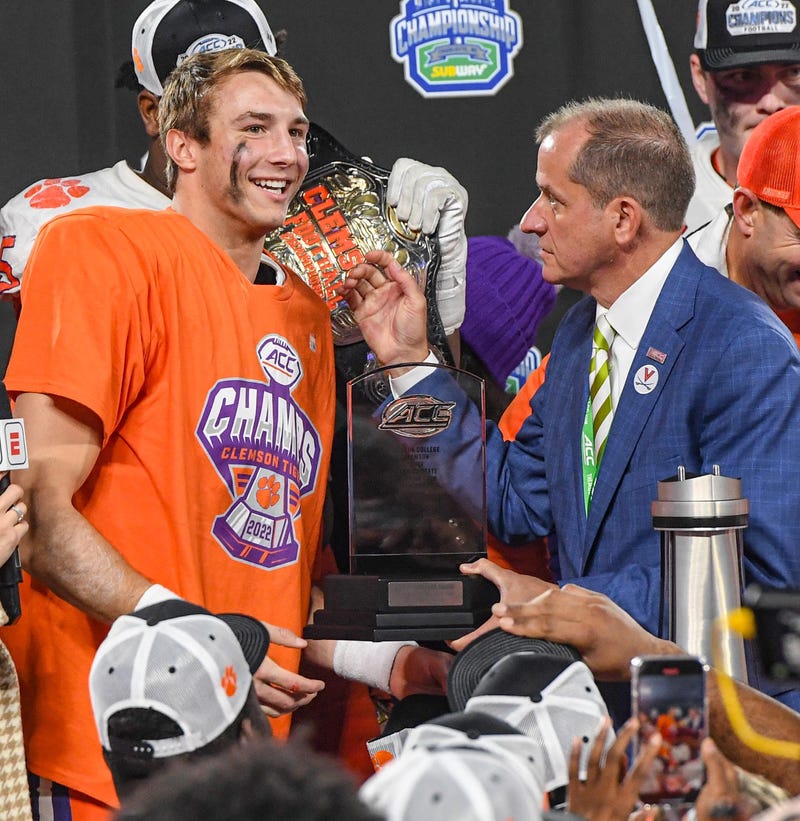 Big performances in all three phases of the game gave No. 10 Clemson a decisive 39-10 victory over No. 22 North Carolina (9-4) to claim the 2022 ACC Championship at Bank of America Stadium. Clemson (11-2) claimed its seventh conference championship in the past eight years, and became the first program to win 21 ACC titles.

Freshman quarterback Cade Klubnik entered the game on Clemson’s third drive, leading the Tigers to scores on five of his first six drives. Klubnik finished the game 20-for-24 through the air with 274 passing yards, and added 30 rushing yards to be named the game’s Most Valuable Player.

Nate Wiggins blocked a field goal attempt and returned an errant pass by 2022 ACC Offensive Player of the Year Drake Maye 98 yards for a touchdown to blow the game open. Clemson totaled 385 total yards on offense and was four-for-four in red zone attempts.

The Clemson defense came away with a touchdown, three takeaways, four sacks, eight quarterback hurries and seven tackles for a loss. Special teams contributed a blocked field goal and B.T. Potter was perfect on a 52-yard field goal and 4-4 on extra points, becoming the first player in ACC history to record 100 or more points in four different seasons.

The Tar Heels struck first with a three-yard rushing touchdown, concluding a 78-yard drive lasting 5:13 that gave UNC a 7-0 lead. However, Carolina’s momentum would be short-lived.

Freshman Cade Klubnik entered at quarterback and led the Tigers on a nine-play touchdown drive to tie the game. Klubnik was 5-for-5 and passed for 50 yards, including a one-yard touchdown pass to Davis Allen in the back corner of the end zone, on the drive. The scoring play was Allen’s career-high fifth touchdown catch of the season.

On the ensuing drive, defensive tackle Ruke Orhorhoro recovered Drake Maye’s fumble, giving Clemson the ball on North Carolina’s 23-yard line. On Clemson’s first play on the following drive, running back Phil Mafah then took a handoff and threw the ball back to Klubnik for a 19-yard pickup. Mafah punched it in on the next play from four yards out to give Clemson a 14-7 lead with 35 seconds to play in the first quarter.

A blocked field goal by cornerback Nate Wiggins gave the Tigers the ball on their own 16-yard line. Klubnik threw a 68-yard dime down the left sideline to Cole Turner, who fell just short of the goal line. Klubnik then ran in the end zone untouched for a one-yard rushing touchdown to put Clemson up 21-7 with 6:03 left in the first half.

In the third quarter, Wiggins picked off Maye in the red zone and returned it 98 yards for a touchdown, breaking the record for longest play in ACC Championship Game history and put the Tigers up 32-10 with 5:05 left in the third quarter following holder Drew Swinney’s successful two-point conversion.

In the final minutes of the third quarter, Clemson increased its lead to 39-10 as running back Will Shipley scored a two-yard rushing touchdown to conclude a nine-play, 86-yard drive.

With a comfortable lead, Hunter Johnson entered the game to replace Klubnik at quarterback. After a scoreless drive on offense, Jeadyn Lukus came up with another interception at the goal line for Clemson. Clemson’s defense added one more stop to seal the 39-10 Championship victory for the Tigers.

After the impressive win, Clemson is once again champs of the conference. There's a popular saying amongst Tiger fans and it rang true on Saturday night, the ACC stands for "Another Clemson Championship". The Tigers are expected to be in the Orange Bowl after winning the league, they will await the official announcement of their destination and bowl game opponent.