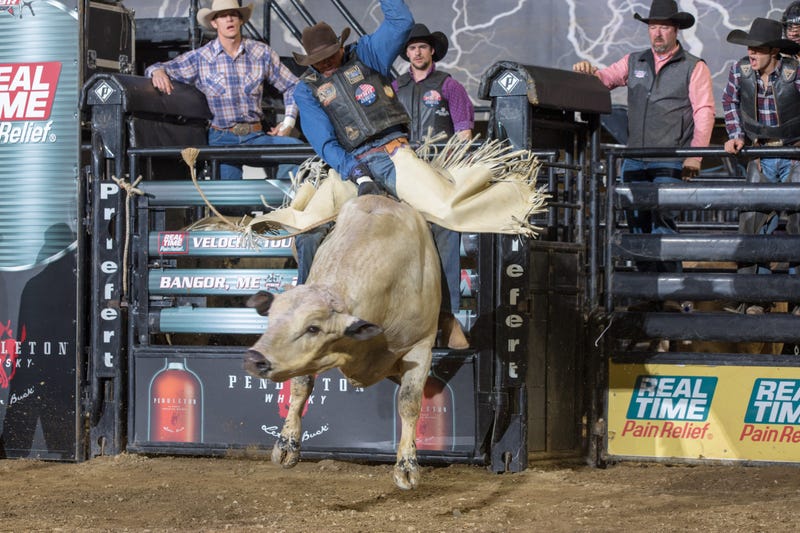 Moreira first put points on the board in Round 1 when he tied for the second-best score, marked 86.5 points atop Grinch (C Check Bucking Bulls).The charismatic Brazilian then surged to the event lead when he rode Chubs (J Bar W) for 82.5 points in the second round.

In the championship round, Moreira drew Gold Standard (Mike Miller Bucking Bulls) as his final animal athlete opponent. While he was upended in 2.36 seconds, Moreira’s initial scores were enough to clinch the victory.

Second was Tyler Manor (Portland, Indiana).In just the fourth event of his young career, the 18-year-old struck in Round 1 when he delivered the fifth-best score, marking 84.5 points atop Belted Magic (C Check Bucking Bulls).

While Manor was tossed by Anchors Gangster (Mike Miller Bucking Bulls) in a close 7.02 seconds in the second round, his opening score was enough to punch his ticket to the championship round.

Regaining his early momentum, Manor rebounded in his final out inside Bon Secours Wellness Arena, riding Rock Solid (C Check Bucking Bulls) for a championship round-winning 81 points to clinch the silver finish, the best of his career.

Another Brazilian rider Afonso Quintino finished third. He delivered back-to-back scores in the opening rounds of competition, marked 81 points on Switch Back (C Check Bucking Bulls) and 79.5 points atop Grinch, to advance to the championship round second on the event leaderboard.

The Brazilian newcomer, however, fell short of the event win when he was dispatched by Satan’s Seed.

Fourth was Round 1 winner Leonardo Lima (Vale do Paraiso, Brazil).

Rounding out the Top 5 in fifth was Grayson Cole (New Ringold, Pennsylvania).

The Pennsylvania native earned points courtesy of his 86.5-point ride atop Little N Loud (Lucas Manning Bucking Bulls) in Round 1.

It was the 4th year PBR has come to Greenville's Bon Secours Wellness Arena. It was the 1st time for a 2-day tour event in the Upstate.