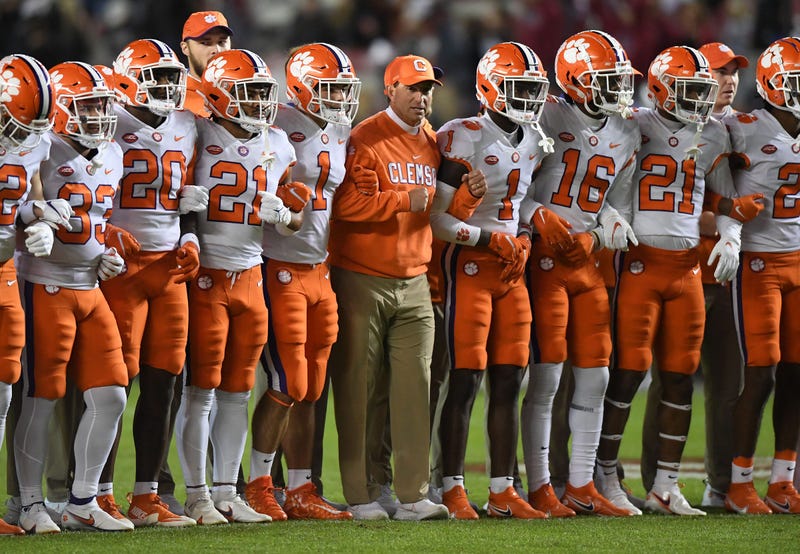 Clemson's defense was suffocating and the run game dominant in Saturday night's renewal of the Palmetto State Rivalry. The Tigers shutout SC 30-0 which is the first shutout in over 30 years in the series. Clemson Coach Dabo Swinney also became the only coach in the history of the rivalry to win 7 in a row. The Tigers came out and set the tone early in the game and neutralized a jacked up capacity crowd at Williams Brice.

I thought it was of paramount importance for Clemson not to allow the crowd in Columbia to get into the game. They did just that, gaining over 100 yards in the first quarter and holding SC to only 12 1st quarter yards. Clemson has started to turn the corner in the last few weeks of the season. They carried that into Saturday night and rode what has become their identity, running the ball and playing defense.

Clemson struck 1st scoring less than 4 minutes into the game, the Tigers went 73 yards on a TD drive to open the contest. Will Shipley scored on a 29 yard TD run to cap the drive and give Clemson a 7-0 lead. The Tigers then took advantage of a short field and got a 29 yard FG from B.T. Potter to extend the lead 10-0 afClemster the 1st.

Kobe Pace scampered for a 34 yard TD run to put Clemson up 17-0 early in the 2nd quarter. The Tigers had a chance to score again late in the 1st. They turned it over on downs in Carolina territory. Clemson tried to throw vertically off a trick play on 4th down to no avail. The Tigers took a 17-0 lead into the break.

The Clemson defense would continue to smother South Carolina in the 2nd half. Offensively, the Tigers would get a pair of FG's in the 2nd half from Potter. Both were impressive made kicks , one from 47 and the other from 49 yards out. The 1st one came in the 3rd Quarter and gave Clemson a 20-0 lead after the three. The second FG came early in the 4th stretching the Clemson lead to 23-0. Clemson would put an exclamation point on the game with a Phil Mafah TD run to make it 30-0 with 2:30 left.

The Tigers played 4 running backs in the game, three of which had a rushing TD. Rencher the 4th team RB only carried once in the game, so every Clemson RB that carried more than once scored. Neither team could get their passing game going on Saturday. There's definitely more to be desired from the passing game for Clemson, so there's room to improve on that end. However, the run game has become the identity of Clemson's offense. They ran for an average of over 6 yards per tote and racked 265 yards on the ground. South Carolina managed just 43 rushing yards for the game. For the 2nd straight week , Clemson averaged over 6 per carry and dominated the ground game.

On another note, Clemson will miss the ACC Title game. It brings their conference championship reign to an end, as N.C. State and Wake Forest both won this weekend. Clemson needed losses from both, Wake will take on Pitt for the ACC Title Saturday. Clemson finishes the regular season at 9-3, I have been seeing Clemson to the Gator Bowl for a few weeks now. Many projections expect the Tigers to be in the Gator Bowl and take on another SEC team. On the bright side for South Carolina they finish 6-6 in Shane Beamer's 1st year. This season proved to be a step forward as the Gamecocks finish .500 and will make a bowl game. Most projections have South Carolina in the Birmingham Bowl vs a team from the American Athletic Conference.