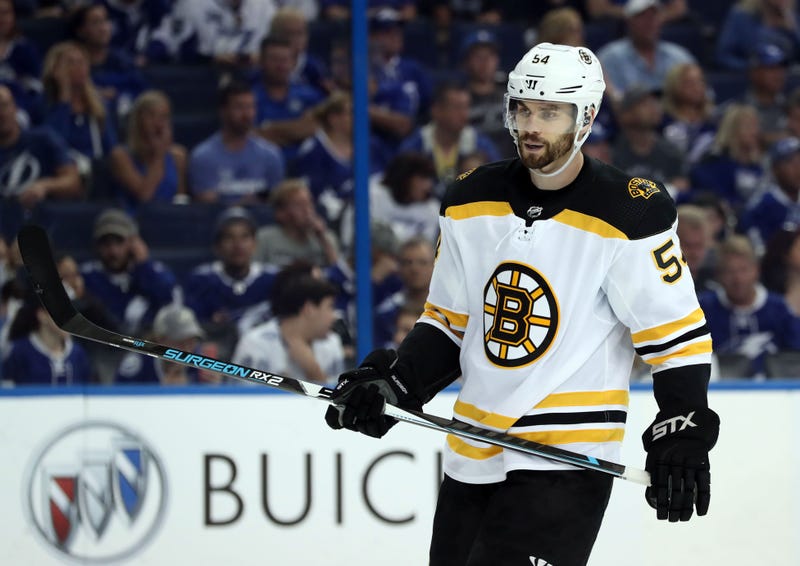 Adam McQuaid had been a Bruin for the entirety of his 11-year NHL career. He won that Cup with that 2011 team. He did it his way, which just so happened to be the brand of grit this town tends to appreciate.

I could throw some stats your way to convince you Steven Kampfer, a 2019 fourth-rounder, and a 2019 conditional seventh-rounder are fine returns for contemporary McQuaid.

We both know it wouldn’t matter.

McQuaid has been the subject of ample, fair criticism lately. He’s a real-time relic of a past some herald as the tough glory days of hockey and others have happily discarded for the new wave of skill and speed. We got that reminder every time a Connor McDavid or even a Torey Krug blew by a McQuaid. McQuaid never had to be either of them, of course, but they made you wonder:

What does he have to be these days -- and at what cost?

You’re not wondering that right now, and that’s fine. First you can think of the rogue goals he seemed to collect at the right times, his 55 fights won as a Bruin, and how his quiet faith juxtaposed his role on the ice.

Then think about the current state of this team. Kampfer ($650,000 AAV) is a... relatively adequate...seventh defenseman. He's much cheaper than McQuaid, who has a year left on his deal with a cap hit of $2.75 million.

The Bruins' most pressing needs are up for debate, but who would argue for a multi-million dollar eighth defenseman?

“Going into the year, we would have had eight defensemen and six would play. It wasn’t automatic that Adam would have been one of the two out, but if it worked out that way it would have been difficult. Even for the one now to will be difficult,” head coach Bruce Cassidy said at Warrior Ice Arena Tuesday. “...Today was a tough morning, but hopefully he gets a great opportunity to play in New York. And we’ll miss him, mostly as person and as a teammate.”

Like Cassidy said, keeping McQuaid would’ve been more difficult than giving him up -- partially due to who he is, mostly because of the sunk-cost fallacy and his contract. They have the option to shift Kampfer down to the minors, alleviate the defensive log-jam, and end up with $5 million in cap space.

This trade would seem pointless if it were a “hockey trade” -- just let McQuaid's contract run out at the end of the year, right? But the Bruins need more cap space, secondary scoring, and draft picks more than they need another $2.75 million bottom-four defenseman.

Especially after the John Moore signing.

They can live with what Kampfer lacks for what he costs. Maybe this is only the first move in a series, but just because the McQuaid trade was a tough call doesn’t mean it was wrong.