The blockbuster trade that sent Juan Soto and Josh Bell to the San Diego Padres rocked the baseball world on Tuesday -- but soon after the framework of the deal was first reported, it seemed it could be in jeopardy.

That's because of the principal parties involved in the swap, veteran first baseman Eric Hosmer, invoked his partial no-trade clause to prevent being sent to Washington.

The seemingly temporary snag was rectified, however, when Hosmer was instead shipped to the Boston Red Sox, with fellow veteran first baseman Luke Voit taking his place in heading to the Nationals.

So, why did Hosmer decline to join the Nats? According to his longtime agent, Scott Boras, it was all about avoiding a rebuilding situation like the one currently ongoing in Washington.

"Athletes, when they become free agents, they want to have a little more control over where they play, and who they play for," Boras told Sam Levitt on 97.3 The Fan in San Diego. "And, certainly, in Eric's contract he had a list of teams that he did not want to go to, because he didn't want to be in a rebuild. He wanted to be in a competitive environment, and we're very happy that the Padres ownership got involved, and helped trade him to a team that allowed him that opportunity."

In Boston, Hosmer was joining a Red Sox team that was .500 and, incredibly, in last place in the bruising AL East entering Wednesday's action. But the Sox were very much alive in the wild card chase, only 3.0 games behind the Rays for the last of three spots.

After a sizzling start to the season, Hosmer has cooled off considerably, which presumably fueled the Padres' interest in pursuing an upgrade at the position, which they eventually obtained along with Soto in the form of Josh Bell.

Through May, Hosmer owned a solid line of .318/.383/.441 with four homers in 188 plate appearances. A June swoon brought him crashing back to earth, but he has heated up again after the All-Star break, hitting a beefy .276/.364/.552 with two homers in his first 33 plate appearances of the second half.

Hosmer's arrival marks a much-needed upgrade for the Red Sox, who have struggled to get production out of the position. His unceremonious departure from the Padres closed the book on a rollercoaster ride in San Diego, where, to the surprise of many, he signed a hefty eight-year, $144 million contract prior to the 2018 campaign.

But he gets a fresh start and a chance to reassert himself in Boston, where he could spend the next several seasons if he exercises the three-year, $39 million player option on his deal in the offseason. 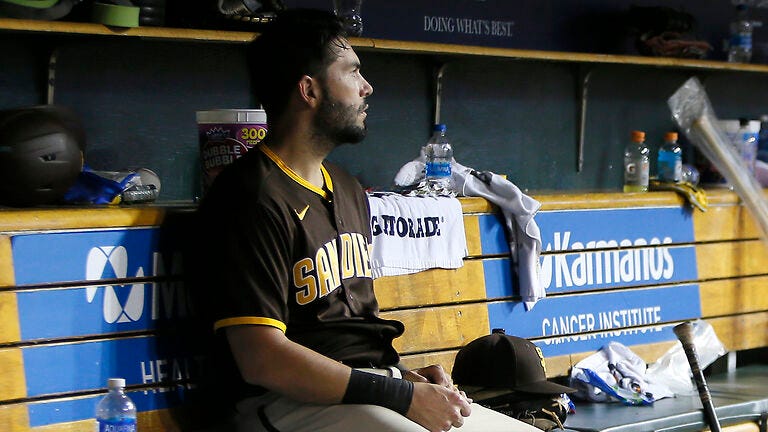