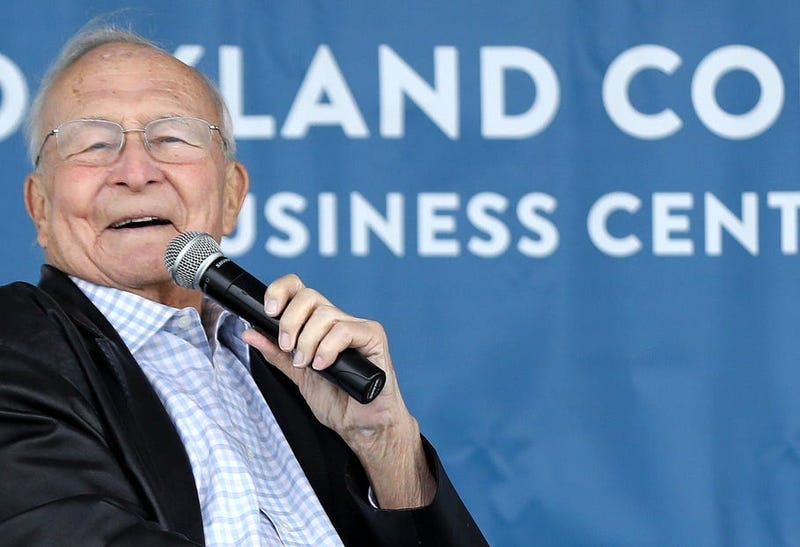 (WWJ) - The top political figure in Oakland County has died. L. Brooks Patterson lost his battle with pancreatic cancer Saturday morning and died at the age of 80.

Reaction to Patterson's death has been pouring in from around the state.

"He was a legend, even to this date. Hopefully we'll have other leaders that will be just as forceful and voiceful as Brooks Patterson," said Oakland County Republican Party Chair Rocky Raczkowski.

"Brooks Patterson served Oakland County for generations and during his time as County Executive made a significant impact on those communities," said Detroit Mayor Mike Duggan. "We’re not likely to see anyone quite like him again."

"My family and Brooks Patterson went back a long time. He was one of a kind. A force of nature. I always appreciated his razor-sharp wit and admired his lifetime of service to the people of Oakland County," said Governor Gretchen Whitmer.

"The one thing about Brooks Patterson, either you liked him or you didn't," said Lansing Bureau Chief Tim Skubick. "He was very controversial. Almost everything he touched, not everybody liked it. But I think at the end of the day, his body of work will never be replicated in this state."

"When I took office as executive, Wayne County needed to implement major fiscal measures to avoid bankruptcy. Brooks generously lent high-level Oakland County staff to share their expertise as we created our Recovery Plan. That played a significant role in the Wayne County turnaround and I will be forever grateful for that," said Wayne County Executive Warren Evans.

"His personality and the way he would handle you and joke around was different, no question about it. But I'm going to tell you, he was an incredibly generous person. You can't help but look at his record, look at Oakland County, it is one of the more premiere counties in the entire country as a result of he and his staff," said Macomb County Executive Mark Hackel.

"Today, is the end of an era in Oakland County. Brooks Patterson was a steadfast leader, who safeguarded Oakland County’s fiscal stability in good times and in bad. His policies and focus in leading this county into the 21st century will never be forgotten," said Sheriff Michael Bouchard.

"In an era when elected officials far too often take the easy way out, Brooks stood firm to his principles and never shied away from a fight. His courage of conviction, wisdom, and sense of humor made even political foes friends, and helped Oakland County to become one of our nation’s best places to live," said Michigan Republican Party Chairman Laura Cox.

"Brooks had a vision for Oakland County that made it one of the most prosperous places in the country.  He dedicated his life to public service and was a champion for his fellow citizens," said Senate Majority Leader Mike Shirkey. "Michigan has lost a leader and a visionary, but his legacy will live on."

"We could disagree, but he did it with such humor it was always respectful. He loved Michigan, he loved Oakland county, his family and friends," said Congresswoman Debbie Dingell. "I hope he and John are sitting together and enjoying the fruits of their lives work. This has been a long hard year of losses of giants for this state."

"He really was married to Oakland County. He loved the job, loved the service," said Former Governor Jim Blanchard. "He would laugh when I say this but he was an Oakland County icon and really, one of the great characters of Michigan politics the last 48-50 years."

Patterson died at his Independence Township home surrounded by family and friends. He was 80-years-old.