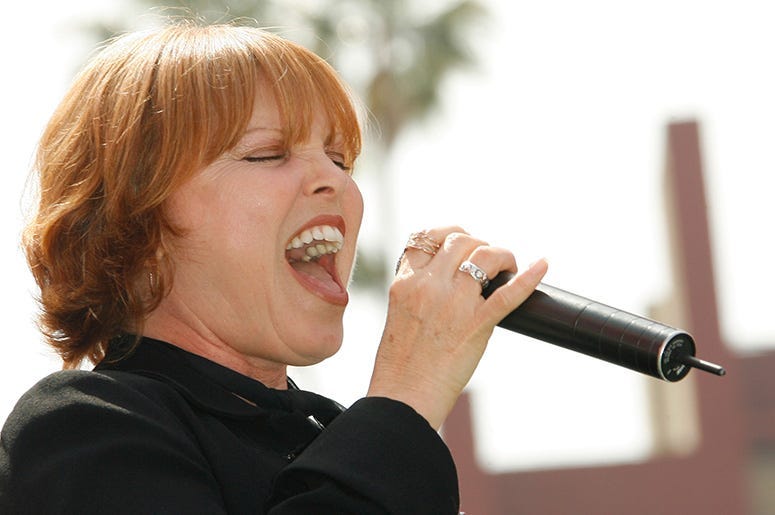 New York Dolls on AVRO’s TopPop (Dutch television show) in 1973. CC-BY-SA 3.0 Beeld en GeluidwikiThis year, there has been more than the usual amount of consternation regarding the list of nominees who were granted access into The Rock and Roll Hall of Fame.  For the first time since the Fan Vote started in 2012, the top vote-getter (The Dave Matthews Band) did not get inducted, even though they garnered over 1 million votes, about 125,000 more than their closest competitor (Pat Benatar – more on that later).

The Fan Vote is also misunderstood, as the Hall of Fame puts the Top 5 vote-getters on one ballot, which counts as only one vote out of 1000 ballots submitted by its members.  So, even though more than 8 million fans cast their votes online under the impression that their vote would count individually, all the votes add up to only about one-tenth of one percent of the total vote. Misleading at best!

Here are our picks for the Top 15 most overlooked artists that have yet to make it into Cleveland’s most exclusive club. 15 New York Dolls

The New York Dolls may have only been on the punk scene for their first two albums beginning in 1973, but they defined punk before the term even existed. One of the first bands to use an androgynous look, they also made their mark on the fashion landscape and are arguably just as influential as The Stooges and Velvet Underground. Overlooked for 20 years, maybe the Rock Hall will at least find the guts to nominate these glam rockers.

The MC5 fell off the short list this year, but we predict they’ll be back next year.  Epitomizing the counterculture of the late 60’s, the MC5 were anti-establishment to their core.  Even their first album set them apart – it was recorded live over two nights at Detroit’s Grande Ballroom.  Featuring the title track “Kick Out The Jams,” it was the first of only three records the band released, but is often cited as one of the most important American hard rock albums of the era.

Guitarist Wayne Kramer is philosophical about their omission from the Rock Hall. “It’s just so awkward because it seems as if the people that kicked the MC5 out of the music business are some of the same people that run the Rock Hall. Maybe there’s been a turnover and there’s a new generation that sees the significance of what me and my friends did a long time ago, I don’t know.” 13 Iron Maiden

Without Iron Maiden, there is no Metallica. And you could say that about any number of metal bands as Maiden is the standard-bearer of “pure” heavy metal – no comprises ever.  Despite very limited commercial radio or television support, Maiden has sold over 100 million albums worldwide, and continues to sell out stadiums internationally still to this day.

Revered in their home country of Canada, The Guess Who hold the distinction of becoming the first band from up North to make serious headway South of the border.  In fact, their single “American Woman” was the first song from a Canadian band to top the Billboard Hot 100.  Add in “These Eyes,” “No Sugar Tonight” and “No Time” and maybe the Rock Hall voters will give them a fighting chance.

In the Rock Hall of Fame, there seems to be a prejudice that exists against progressive rock acts, which may be killing Jethro Tull’s chances. Or maybe it’s the fact that the voters still haven’t forgiven Tull for besting Metallica in 1989 at the Grammy Awards and winning Best Hard Rock/Heavy Metal Recording. Either way, Ian Anderson’s flute solos and many of Jethro Tull’s song hooks are lodged in our collective brains, so that’s gotta count for something.

When oddsmakers gave Pat Benatar a 95% chance to be voted into the Rock Hall this year, this nomination seemed like a slam dunk, especially because the female representation in the Rock Hall has been weak.  Even though she garnered 882,000 votes, epitomizes classic rock and has major name recognition, it appears that sexism once again raised its ugly head and helped deny her induction.  Odds should be good though that she gets another chance next year.  It worked for the Doobie Brothers!

Judas Priest led the hard rock fan vote this year with 675,000 voters and pretty much define where commercial metal began.  Songs from Screaming For Vengeance, British Steel and Defenders of the Faith have pushed sales of their albums past the 50 million mark and influenced countless metal bands after them.  Their potential induction into the Rock Hall this year may have been hampered by fellow hard rock nominees Motörhead and Thin Lizzy who probably split the vote.

Joe Cocker‘s raspy voice and unique delivery have redefined some of the greatest songs of all-time while scoring some of his own unique hits, too.  His versions of “With a Little Help from My Friends,” “You Are So Beautiful,” “Feelin’ Alright,” “Cry Me a River” and “The Letter” can make your forget the originals.  Billy Joel, Paul McCartney and other legends have voiced their support for his induction.

Mott the Hoople set the template for a brand of mainstream rock that influenced everyone from Bad Company to Cheap Trick.  Their career was cemented when David Bowie gave them the gift of “All The Young Dudes.”

Motörhead’s omission from the Rock Hall is glaring, as they’ve influenced pretty much every hard rock band you know. The prototypical thrash band, Motörhead were as consistent as they were influential and sold over 30 million records to boot. Sadly, the classic lineup of Ian “Lemmy” Kilmister on bass and vocals, “Fast” Eddie Clarke on guitar and Phil “Philthy Animal” Taylor on drums have all passed away in the last three years, so their induction would be bittersweet.

After winning the 2020 fan vote with around 1 million votes, Dave Matthews Band fans have been livid after their denial into the Rock Hall.  Since 2012, with no exception, the top vote-getter in the fan vote has always been inducted.  Many think DMB was denied because they aren’t “classic rock” enough.  Maybe their status as the #3 band with the most #1 albums – behind only the Beatles and the Stones – will help their story in the next few years.

With songs like “Werewolves of London” and “Lawyers, Guns and Money” you’d think David Letterman’s favorite artist would have been a shoe-in for a nomination.  And, as a songwriter, Zevon deserves to be mentioned with many artists already in the Rock Hall.  When he found out he was dying, Zevon recruited just a few of his close friends for his final album: Bruce Springsteen, Don Henley, Jackson Browne, Timothy B. Schmit, Joe Walsh, David Lindley, Billy Bob Thornton, Emmylou Harris, Tom Petty and Dwight Yoakam.  That kind of love and respect should put him into serious contention, right?

Roxy Music‘s pioneering of glam rock had a huge impact on the likes of David Bowie, Duran Duran and many other “new wave” acts in the 70’s and 80’s.  Co-founded by music powerhouses Bryan Ferry and Brian Eno, many feel Roxy Music is the second most influential UK band, after the Beatles.

As The Guardian states, “Somehow, in a landscape dominated by Led Zeppelin at one end and The Osmonds at the other, Roxy Music managed to reach the Top 10 with a heady mixture of futurism, retro rock ’n’ roll, camp, funny noises, silly outfits, art techniques, film references and oboe solos. And although their popularity has ebbed and flowed, their influence has been strikingly consistent.” 02 Soundgarden

Believe it or not, Soundgarden was the earliest arrival on the scene of the “Big 4” bands out of Seattle, the others being Pearl Jam, Nirvana and Alice and Chains.  As such, their influence rubbed off on many of their peers.  At the height of their fame, they stepped away for almost 13 years, but then returned to greatness when they reunited.  It would be another bittersweet addition to the Rock Hall after the death of leader Chris Cornell. After garnering 722,000 votes in the fan vote this year, their addition to the Rock Hall would seem like a sentimental gimme.

Ozzy Osbourne’s already been inducted into the Rock Hall with Black Sabbath, but so far, 21 artists have been inducted into the Rock and Roll Hall of Fame multiple times and arguably he should be #22. His solo career helped establish metal during the 1980s and his influence on musicians (Ozzfest anyone?) has been great. With his return to touring this year, a new album, his Top 10 collaboration with Post Malone, and his recently revealed diagnosis of Parkinson’s Disease, Ozzy should be the one to beat for next year’s induction.

Related:20 Facts You Might Not Know About Black Sabbath

This article was updated January 21, 2020 from a previous version.

The post 15 Most Overlooked Artists by the Rock and Roll Hall of Fame appeared first on Classics Du Jour.