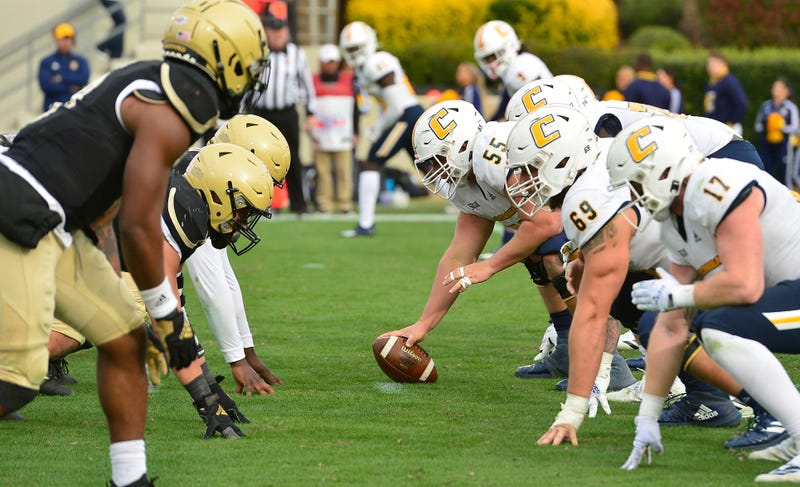 To open the 2022 season, the Wofford College football team was shutout 31-0 by Chattanooga on Saturday night at Finley Stadium. The Mocs turned three Terrier turnovers into 21 points on the way to the Southern Conference victory.

Wofford begins the season with a loss for the second time in the last seven seasons. The Mocs, preseason picks to win the league, are 1-0. The Terriers were led by Jimmy Weirick with 14-of-21 passing for 133 yards, while Kyle Parsons rushed for 46 yards on 12 carries. The Mocs were led by Ailym Ford with 156 rushing yards and two touchdowns.

“There were some positives out there,” said Wofford head coach Josh Conklin. “It is going to take a lot of work and some time to work through some of the issues. I thought the second half we settled down a little bit and got some drives established with our run game. Jimmy (Weirick) did some good things. You are not happy with the turnovers but he did some good things in running the system for the first time in a game. I love our guys and I love our coaches and I think we will continue to get better. There were some third downs and some things in the passing game that we protected really well against a really good front. The run game in the second half with some of the inside zone really started to click which was great to see. The offensive line got better as the game went along. We just dug ourselves a hole in the first half that we couldn’t get out of. We will wake up tomorrow morning and get back to work.”

The Terriers had the ball to open the game and had one first down before punting. The Mocs had a first down and then added a 34-yard completion. After two more passing first downs, Ailym Ford scored from three yards out for a 7-0 lead at 5:54 in the first quarter. With the ball back, the Terriers went three-and-out and punted. The Mocs had a nine-play drive with three first downs that ended with a 21-yard field goal for a 10-0 lead with 1:33 remaining in the first quarter. Wofford had two first downs before a pass thrown by Jimmy Weirick was intercepted by Reuben Lowery and returned 45-yards for a touchdown as the Mocs led 17-0 with 13:38 on the clock in the second quarter.

After a 39-yard pass play to move across midfield and another first down, a 17-yard touchdown pass from Preston Hutchinson to Javin Whatley made it a 24-0 score with 3:38 left in the half. Wofford had one first down on the ensuing drive before punting with 45 seconds on the clock. The Mocs ran the ball twice before the half ended.

To start the second half, Chattanooga went three-and-out and punted. After a first down pass to R.J. Khayo, Weirick found Landon Parker for a 28-yard completion. Nathan Walker added a first down and then on fourth-and-one from the 12-yard line a run by David Legette picked up a first down. On third down, a bad snap was recovered by the Mocs at the 14-yard line to end the scoring chance. With Chattanooga facing third down, Ailym Ford went 86-yard for a touchdown and a 31-0 lead with 4:40 left in the third quarter. The Terriers went three-and-out on their next drive. The Mocs had three first downs on the following drive, but a sack forced a punt.

Wofford took over at the eight-yard line with 13:44 on the clock in the fourth quarter. After three first downs, including two by Kyle Parsons, the Terriers had to punt. The Mocs had one first down before punting back to the Terriers with 5:28 left in the game. Kyle Parsons added two more rushing first downs before the team punted and then the Mocs ran out the final two minutes of the game for the victory.

Wofford is back in action this week, hosting Elon Saturday night at 6 PM.